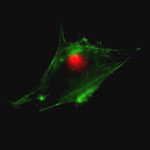 The objective of this study was to compare the biological effects on stem cells of two key cell-adhesive proteins adsorbed onto molecularly-designed model surfaces. It was carried out in collaboration with Professor Graca Almeida-Porada, from Cell and Molecular Biology Program, Univ. Nevada (USA).

Single-component and mixed self-assembled monolayers (SAMs) of alkanethiols on gold with OH and CH3 terminal groups were prepared at 100%, 65%, 36% and 0% of OH at the surface, to generate a range of surfaces with a simple chemistry and a wettability gradient. FN and VN were adsorbed under non-competitive (single-protein solutions) and competitive (multi-protein solutions) conditions, and compared at different levels: adsorbed amount (radiolabelling), elution, functional presentation of cell-binding domains (ELISA), and role in mediating cell adhesion (antibody-based assay). The observed trends were related to mesenchymal stem cell response in terms of adhesion and overall cell morphology.

Under non-competitive conditions, adsorption of both proteins increased with surface hydrophobicity. The presence of competitive proteins significantly decreased the adsorbed amounts, although both proteins were still detected in all SAMs. Adsorption of FN followed a trend similar to that of non-competitive conditions, while adsorption of VN was higher on 100%OH-SAMs. Concerning elution, retention of adsorbed VN was always higher than that of FN. For both proteins, functional presentation of cell-binding domains was more effective on the more hydrophilic 100%OH-SAMs. This fact, coupled to the ability of this type of SAMs to selectively recruit and retain VN in the presence of competitive serum proteins, seems to correlate with the better cell response observed on these surfaces, as compared with hydrophobic 0%OH(100%CH3)-SAMs.